UNGLACIATED REGION OF THE MIDWEST

After 4 hours of sleep, I awoke excited.  It was Christmas morning AGAIN.  I was about to open the 2nd present of the Coulee Challenge and I could not wait!  I got all nostalgic and wore my 2013 Wisconsin Triple Crown Series kit.  I would be riding in the same regions of the Kickapoo Kicker event, which started/ended in Viroqua, Wisconsin.

OVERVIEW OF THE DAY:  On the Grand Randonnee menu today was 180 miles with 8,766 feet of climbing (49 feet/mile) from Black River Falls to Reedsburg, Wisconsin.  Greg Smith, Regional Brevet Administrator of Driftless Randonneurs, characterized this day with the “First 100 miles are probably the hardest on the whole route.  Don’t let the short distance fool you, It’s a tough day.”  There were 14 climbs on the route with ranges from 3-8.2% and the steepest (Excelsior) at 12.5%.  The Excelsior climb was longer than most  at 1.5 miles in distance.

Day Two is where we experienced the full variety of the terrain offered at the Coulee Challenge 1200k.  This day erased the notion that the “midwest is flat” from your mind. 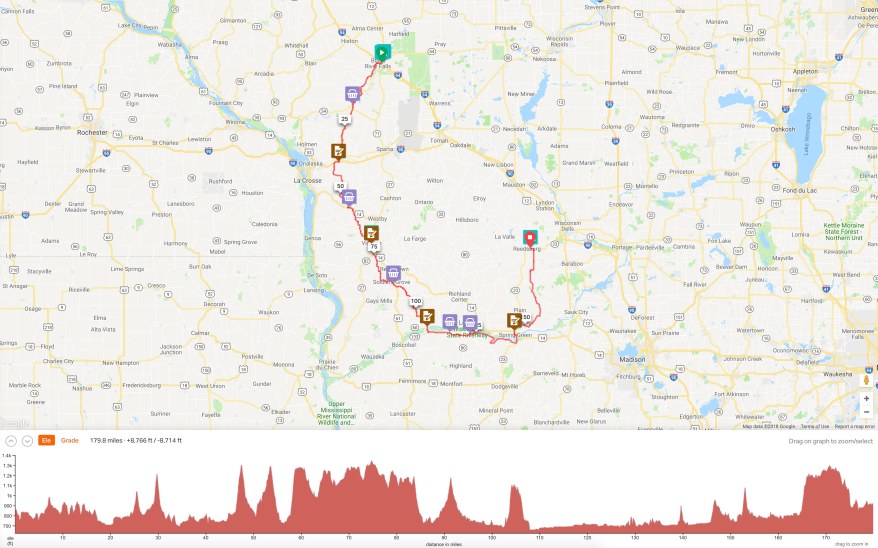 After a nice breakfast, I walked outside with my bike around 5:00 am.  I began to organize my lights.  The sound of cicadas filled my ear.  A large group was just leaving as I walked outside.  So it looked like I would be heading out alone.  I started riding at 5:27 am out of Black River Falls in a cool mist.  Let the adventure begin.

I felt good this morning as I started out towards the first control in West Salem, Wisconsin. With 4 hours of sleep and a nice breakfast to fuel me, I began to warm my legs up.  The first control was at mile 39.  I began climbing right away out of Black River Falls.  I had heard from the route organizers that the first 100 miles on Day 2 was the toughest of the 1200k.  In my mind, I characterized today as the “KING/QUEEN stage” of the Coulee Challenge.  It was the hardest of all of the 4 days.  I was excited for the challenge and adventures ahead.

I began unwrapping the bow off of my present.

As luck would have it, the challenges started fairly early in Day 2 for me.  Despite being fully charged, my Garmin completely froze at mile 5.3 miles.  “Are you kidding me?” I yelled out to myself.  No way was this happening on my 1200k.

I could not re-boot it.  I could not turn it off.  It had failed me.  What was I to do?  Well, I had to let the battery die so it would stop beeping.  So for the next 3 hours, I had the constant beep from my damn Garmin in the background.  On the positive side, I was glad I had my phone and Ride With GPS (RWGPS) as a back up.  I did not have a mount on my bike for my phone.  As a result, I had to keep my phone in my Relevate design front handlebar feedbag and listen to the cues to turn but would not have any data to look at as I rode.  For those of you not familiar with cycling applications, the RWGPS application has an audio feature which gives you turn by turn audio navigation.  This was the 2ndtime this season I had issues with my Garmin.  I made an important NOTE TO SELF at that moment to look at Wahoo Element bike computers for next season.  Not only had I had issues with my Garmin, there were others I met at the Coulee who had experienced similar problems in the past.  Many of them had or were planning on going to Wahoo bike computers.

As in the case of randonneuring, you need to flexible and adapt to the situation.  Cycling mirrors life.  I had to continue to move forward.  Initially, I was thinking of borrowing a friends Wahoo bike computer on the ride, but then decided against it.  As the day went on, using my RWGPS/phone seemed to be working well for me.  I did not want to have the added stress of using a new bike computer/system shift me off of my flow.  Although I would not be getting any data (mph, rpm, mileage, etc…) as I rode, I rode with perceived exertion as my guide.

CONTROLS:  The controls for today included:  West Salem, Viroqua, Highland, Spring Green and the overnight in Reedsburg, Wisconsin.  Additionally, I was also looking forward to also getting into this particular region of Wisconsin as these are some of the same areas I rode at the Kickapoo Kicker event of the 2013 Wisconsin Triple Crown Series.  The 35 mile stretch to Viroqua had 2618 feet of elevation gain, which equated to 75 feet per mile of climbing.  Yes, everyone had to have their “Big Girl/Big Boy” pants on today.  The Excelsior climb (mile 100) was the main course on the randonnering smorgasbord. 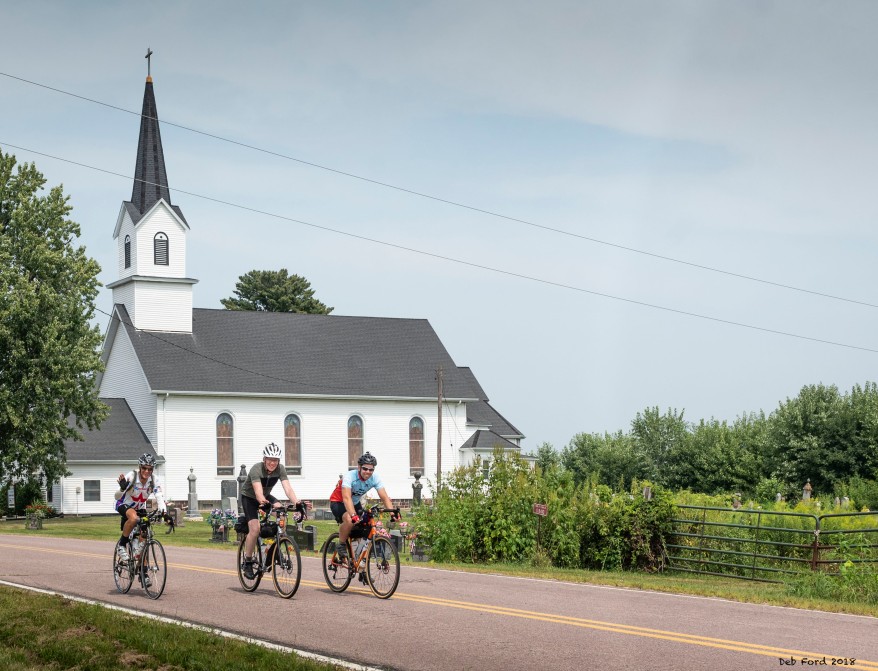 I rode most of the morning alone until I came up upon a Minnesota Randonneur from Apple Valley, Minnesota, Robert Kingsley.  He was riding in his first 1200k.  I enjoyed his company as we moved from West Salem to Viroqua.  With both of us being from the midwest, we talked about riding with the Minnesota Randonneurs, various midwest cycling events and about mutual friends we shared.

We continued to climb as we moved along the route through Barre Mills, Greenfield and Coon Valley.  The efforts in climbing were rewarded with magnificent views of winding roads into river valleys.

About two hours out of the Viroqua control, I came upon 2 riders from Colorado and Seattle.  Don and Ken Ward, twin brothers, were enjoying their yearly adventure excursion trip on the Coulee Challenge 1200k.  They were accomplished randonneurs and strong cyclists.  We shared riding adventures and training secrets for the Coulee.  Additionally, we shared our excitement for the upcoming Excelsior climb at mile 100.  We knew it was going to be hard.  We talked about how we planned on tackling the climb.  With the gearing I had set on my Salsa Warbird (rear cassette 11/32) I wasn’t sure I would be able to make it up the climb with all of my gear/bags.  I would give it a try, but would be fine if I had to walk it.  I did not want to overexert myself and then be spent the remaining 86 miles to the overnight.

We continued to move through southwestern Wisconsin towards Soliders Grove.  The views were quite spectacular as they had been since we started out of Apple Valley, Minnesota.

Sharing the Coulee with Don and Ken Ward

Additionally, as the afternoon progressed, I ran into both Kit Olsin and Scott Gregory again from the Minnesota Randonneurs.  It was nice to share the road with them again on Day 2.  We all continued towards Excelsior.

At mile 100, I met the infamous Excelsior climb with Don, Ken, Scott and Kit.  Greg Smith, Driftless Randonneurs Regional Brevet Administrator commented that “there are plenty of steeper climbs in the Driftless – this one is “only” 12.5% at its steepest but you’re climbing for just under 1.5 miles.”  Again, these first 100 miles were tough.  There were 14 climbs on the route with ranges from 3-8.2% and the steepest was Excelsior at 12.5%.  This was a longer climb at 1.5 miles. 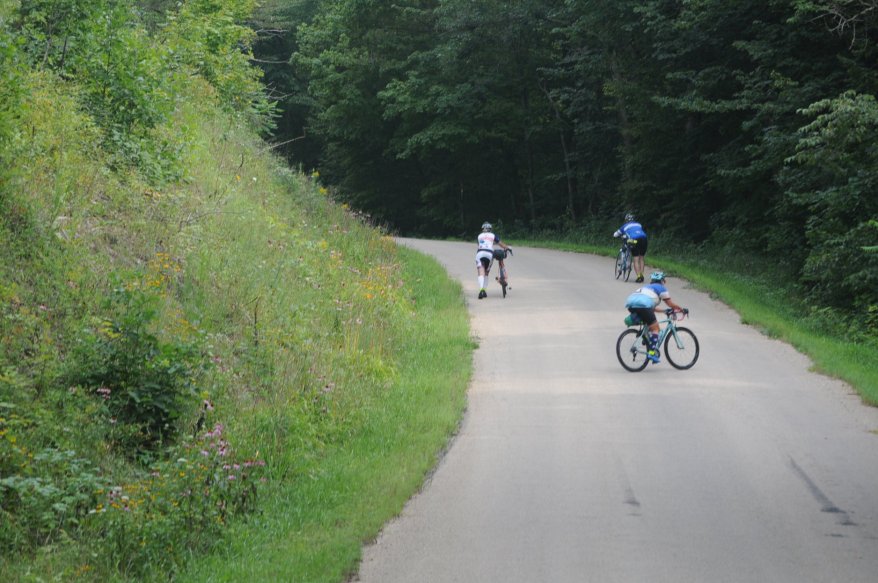 As we began the climb up Excelsior, we were welcomed by Greg Smith (Coulee Challenge leadership team and Driftless Randonneurs RBA) and his wife, Marcia.  Unfortunately, I could only climb the first 1/4 of Excelsior, the grade pitch hit 12.5%.  OUCH.  I already had 338 miles on my legs.  I elected to walk the rest of the hill to conserve and save my legs for the remaining 86 miles of Day 2.  It was sure fun to watch others move up the climb, especially Kit.  She really killed the climb, steady and smooth.  Kit is an exceptional cyclist, amazingly strong.

I finished the climb sashaying with a smile and some girl power attitude.   I was proud to walk this hill, no shame.  As I hit the top, I took a deep breath, exhaled and exalted “Namaste”.

I immediately got back on the saddle and used the downhill and flat terrain to make up time in the bank.  At this point, the terrain became more flat to rolling.  I welcomed this change to give my body time to recover from Day 1 and the challenging first part of Day Two.

I continued to use my efficiency off the bike as I moved through the control in Highland at mile 130.  I was making up good time on the flat terrain.  I felt good.  I felt strong.  When I arrived at the last control in Spring Green, there was a nice sized group there.   I saw Ana Adams and Sarah Hreha there, it was good to see them again.  Scott Gregory was also there and talking to Jim Solanick.  It was good to see Jim again as we shared the road the day before.  I shared the control with Scott and Jim.  We talked for a bit and I refueld to finish up the remaining 27 miles to the overnight.  I did not spend too much time there as I my goal was to get to the overnight by 11:00 pm.

As the sun was setting, I left the control in Spring Green alone.   Soon after I left, Ken Ward (Washington) and Don Ward (Colorado) came alongside me and we all agreed to ride together as it was getting dark.  There is always strength in numbers riding in the dark.  It seems to be an unwritten randonneuring rule that when it gets dark out, people tend to stay together.

I arrived at the Reedsburg overnight control at 11:05 pm with Ken and Don Ward. I was very happy with my ride today which showcased the larger towns of Viroqua and Spring Green, and a section along the Wisconsin River.  I had demonstrated a great deal of efficiency on/off the bike despite not having my Garmin bike computer to use.  I kept my control time down and felt strong physically.  Truth be told, my 2nd present of the Coulee Challenge was even better than the first gift I received yesterday.

As I parked my bike in the large conference room of the hotel, I was greeted by good friends Bob Booth and Melissa Hardin as I checked in.  They were in charge of the overnight.  There was a bountiful spread of food which consisted of chili, rice, drinks and desserts.

This was an added bonus for me to see both Bob and Melissa.  I met them in 2015 when I started randonneuring.  Robert Booth is both a Randonneur USA and midwest randonneur legend with many RUSA awards to his name including:  multiple K-hound, RUSA cups, Mondial, Randonneur 5000, R-12, P-12 to name a few.  Melissa Hardin is the ultimate super-domestic.  They are my rando angels who saved me at Paris-Brest-Paris 2015 when some of my luggage did not arrive for the start.  Not only are they my cycling angles, but Bob has been one of my randonneur mentors since I began randonneuring in 2015.  I talked with them a bit before I headed to my room.  I quickly showered and set my alarm for 4 hours of sleep.

As I closed my eyes and drifted to sleep, I felt thankful…

I could not wait to open my 3rd present from the Coulee Challenge 1200k.

in the Driftless region

of Wisconsin and Minnesota.

My journey to Paris-Brest-Paris 2015: An Ancienne in the Grand Livre

An avid cyclist who lives life passionately on and off the bicycle. Follow me on my cycling adventures... View all posts by DMP

“There is no path to happiness: Happiness is the path.” -Buddha
Wander Often. Wonder Always.
IT’S A LOVELY DAY!
Pedaling my bike FORWARD for EQUALITY, INCLUSION and CHANGE in the 2nd annual virtual EMPOWERMENT International Women’s Day Together WE Ride peloton with my PERSISTENCE patch! Celebrating #iwdbike with the Indiana Randonneurs on a gravel #partypace. Pedal FORWARD. Ride Inspired. #internationalwomensday #internationalwomensday2021 #choosetochallenge #pactimo #skida